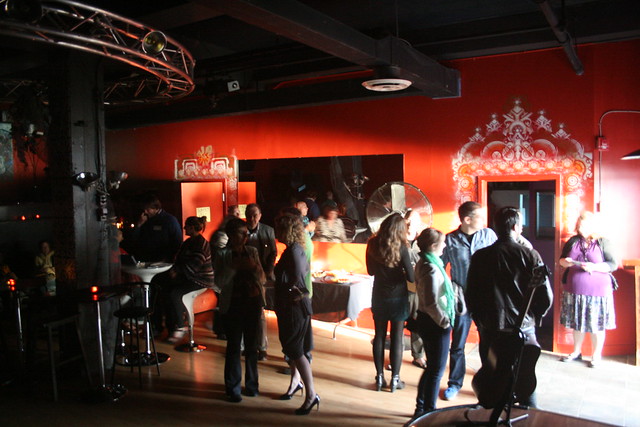 Imagine an intimate club that hosts the world? That’s the dream of entrepreneur, Jason Guille. Jason runs the Sunset Room, a club space with capacity for 100 people that sits perched overlooking Victoria’s harbourfront. He is seeking to use his venue, augmented with technology to stream special events to the world at large.

Until now, Guille and his team have been using a cobbled together collection of webcams and computers to push their video productions out. If people fund his IndieGogo campaign, he will have enough money to do an upgrade of his equipment. 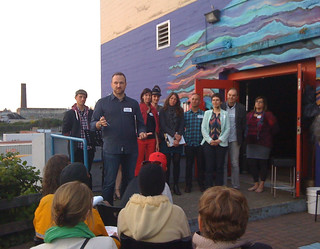 We gathered at the Sunset Room last night to find it dark. I wasn’t surprised. There was a massive fire two blocks over and it’s common practice that the firefighters will whack the power to the area (water and electricity don’t mix). Video streaming relies heavily on power and communications. You’d think this open was doomed-- it was not. Jason and the Sunset Room reacted quickly. The event was lightless but lively. We moved out of the room and basked in the sunset light, Jason unfolded his vision.

Taking a page from the TED and TEDx conferences, the Stream of Consciousness Project is the next step in the evolution community gatherings: a live-to-web, high definition video platform to streamcast gatherings to global audiences in real-time.

The Case For Victoria

The money raised in the IndieGogo campaign will be used to outfit the Sunset Room with cutting-edge technology to live stream anything. If the campaign that exceed its goals, the project plans to construct a mobile rig that can be used to live stream from any venue on Vancouver Island.

Pre-streaming, workshop have to be attended in person. When I attend a cool talk, I wish it were recorded for others. The Stream of Consciousness’ vision is to construct and maintain a sophisticated library of educational content that can be accessed by anyone, anywhere.

In order to take our project to the next level, it’s asking people to contribute towards their goal of $50,000. This is a fixed campaign. If they do not reach that goal, all of the funders will get their money back. If the donations exceeds their goal, they will press to fund their stretch goals: the mobile rig and the long term storage library.
Help Out ! Click Here
Tags:
90-Days
Fund The Stream