How To Reverse the Effects of BPA

If you're wondering how you and your dog are both getting fat, it could be as simple as canned foods. Many canned products are lined with a protective coating so that the contents of the food (like the acidity of canned tomatoes) doesn't interact with the metal to create erosion and spoilage. That protective layer is commonly made of Bis-phenol A (BPA). 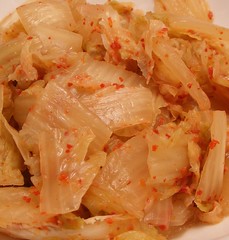 BPA has been getting a lot of bad press because its an estrogen-mimicking chemical. It's not turning us into menopausal women, but it's tricking our body into thinking that. Just as arthritis and gout deliver their impact is similar ways, estrogen and BPA spawn the same reactions in our bodies.
Important news for the Pink Ribbon crowd: 130 studies tie BPA to breast cancer. The negative effects of BPA do not end with cancer: it can be linked to obesity, hormonal imbalance, and a massive reduction in male fertility rates. BPA is very prevalent: 95% of paper money in the US and is in 18 out of 20 of the most popular canned foods. None of the labeling lists the can lining.

These products DO NOT contain BPA as of this writing:

Before you choose a product, flip it over and look at its recycling number. It is best to avoid #7 plastics. Plastics with the recycling labels #1, #2 and #4 on the bottom are safer choices and do not contain BPA.

#7 isn't so lucky when it comes to BPA
Type 7 is the catch-all "other" class, and some type 7 plastics, such as polycarbonate (sometimes identified with the letters "PC" near the recycling symbol) and epoxy resins, are made from bisphenol A monomer. Those products contain other plastics, including acrylonitrile butadiene styrene, acrylic, polycarbonate, polylactic acid, nylon and fiberglass. Used in most plastic baby bottles (sorry for the estrogen mimics, baby), "sport" water bottles (that's one way to stop joggers), clear plastic "sippy" cups and some
clear plastic cutlery. New bio-based plastics may also be labeled #7.
Polyamide or PA is typically used for kitchen utensils. Polyethesulphone or PES is a high heat material that can be used for microwave cooking.

#3 Plastic
Type 3 (PVC) also may contain bisphenol A as an antioxidant in plasticizers.[5] This refers to "flexible PVC", but not for rigids such as pipe, windows, and siding.
#3 is used for Polyvinyl chloride, used for cling wrap, some plastic squeeze bottles, cooking oil and peanut butter jars, detergent and window cleaner bottles.

Pushing the Reverse Button
How do you reverse the effects of BPA? First off limit continued exposure to canned foods, plastics and food stored in plastic; and cosmetics. Opt for fresh items or items stored in glass or paper where possible. If the BPA threat gets the exposure it deserves, looking for labeling to list the presence of BPA. There are natural substances that can reverse this damage on a number of levels. Recent major studies found that probiotic supplementation can degrade the presence of BPA. These substances have been shown to reverse the damage:

These combat the effects on BPA toxicity, presence, and damage to different degrees. One study, involving a pro-biotic bacteria present in kimchi was espoused while a Japanese Department of Environmental Technology, found that the probiotic bacteria – Bacillus pumilus, is capable of degrading BPA. Royal jelly has been found to halt the estrogenic effects of BPA and that could have an impact on the development and spread of cancer. When I look at the list of the above products (black tea, kimchi, fermented foods, etc.) I'm reminded of how a lot of Asian diets seem to naturally combat what BPA could be bringing to the party. At my favorite food fair in Richmond, I look around the room as I eat my food and fuel my fattitude. Other people are eating much more fattening foods and dizzying quantities and they're shoveling the food into these tiny frames. Now I have to wonder if part of the secret of their high caloric intake and low to modest body weight is the remainder of their diet and their practices?

Copyright © 2020, Shawn DeWolfe. This has been a Drupal Driven Website