The Friday of Social Media Camp was a whirlwind. With four channels of simultaneous talks, you can’t help but miss three channels at any one time. Here are the choices I made:

Someone else was up before him, who I missed. Todd Maffin spoke about Building a Killer Viral Marketing Campaign. Here's the crib sheet:

ACC Matching is attention to: Audience Creative Call to Action

Don't make it crazy complex-- take one good idea and run with it.

What's the mood? One of three moods will work.

There are two aspects that he omitted that I always factor into making a campaign go viral:

Pivot off of real world and its icons. 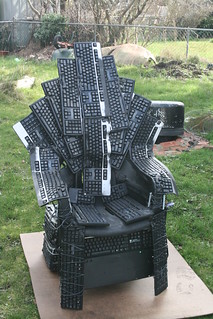 My Throne of Nerds hit big because its apex of uptake coincided with the DVD release for the previous season. My Seinfeld spec script got a ton of downloads on the night of the series finale. Mainstream culture pushes so much into our day-to-day life, riff on that.

The Medium is (part of) the Message

When you push stuff out there, make sure it is channeled through the ideal channel for digestion. Videos go on Youtube. Photos go on Flickr and Instagram. Discussion happen on Twitter and Facebook. Blogging is where you can mix and match. Find the idea platform to showcase your work and use that primarily. Eventually, you can pipe a similar message through all of the channels, but don’t dance about architecture.

Melonie Dodaro spoke about to build a LinkedIn profile to maximize your impact.
The first steps are a no-brainer once she spoke of them: Choose the right keywords and liberally work them into the story of your career. When you name your role, you are declaring who you attract “Owner” or “President” say you want to be sold to. I quickly changed my role at Where Can I Buy Anything Online Inc. to “Drupal Developer” even though I am also the company president. LinkedIn is used for prospecting, but when it comes to closing the deal, that happens in the real world. Find ways to take those interactions offline.
Melonie has a cheat sheet: LICodeCheatSheet.com

I attended the panel and social media expert, Scott McDonald imparted some excellent advice. Lil’ Victoria has not awoken to what could happen to the region if tourism was capitalizing on social media and the Internet. It’s an arms race and some of the local are showing up with slingshots. Scott’s advice and its execution at the Butchart Gardens was terrific.

During my lunch break, I posed in front of the Hotel Zed VW Van.

April spoke about how to be mindful of the story you are telling. What you say requires context. You have to consider your story from the customer value perspective and contextualize it to match their needs and priorities.
When you tell your official story, cover the key points of what you do and your history. Try to avoid the creation myth that seems to come with so many start-ups that happen in someone’s garage. Make it a true story. I try to leave out the "there has to be a better way!" but the impulse to include it is strong. Use customer testimonials and case studies to tell clear, positive and awesome stories.

Sue left me exhausted. Until her talk, I would commonly say, “f-king Instagram.” It was the ColdPlay of social media. Maybe popular, but I don’t care. Sue changed my mind on that. The Internet dawdled for 20 years before the Web came about in the early 1990s. The Web was visual and that’s part of why it exploded. Instagram, like the Web, is all about being a visual medium. There are many cool ways that Instagram can be the Lake Victoria or your content creation and delivery.
Tags:
Social Media
90-Days