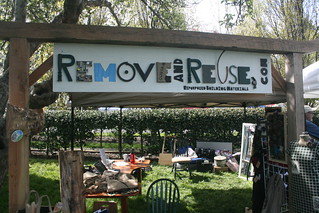 I dislike waste. When we do a construction project, I feel a real pull to make use of every last scrap of material.
We have a number of reno jobs. We also generate a great deal of junk (aging stuff, found stuff, et cetera). A local website, https://removeandreuse.com/ has begun to list items that are not yet at their end-of-life. It’s a cool way to wring a little more use out of stuff that other people consider junk. Here’s a quick recap of how I built four projects with scraps: a hobbit house, a fire pit, a greenhouse and homage to the Elder God, Cthulhu. 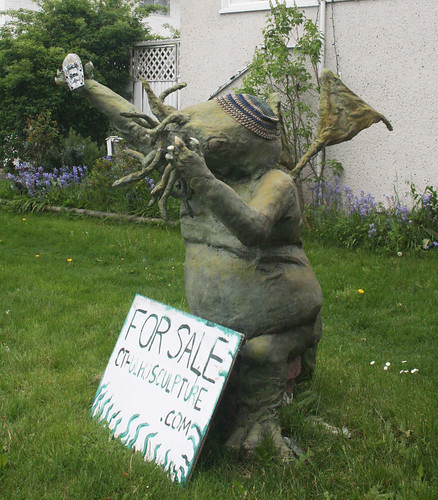 We had an old busted BBQ. We had many old cat litter buckets and other pieces of junk lying around. I was committed to turning that crap into something. I used the BBQ pedestal as the base for the sculpture and proceeded to build it up from there. There plenty of new materials in the build, but at its core, there is junk. There is so much junk in there that I think I cannot sell this in the U.S.. I imagine the border guards ripping it apart to see what is at is core. Its core is junk and a souciant of evil (but then, I put that in everything). 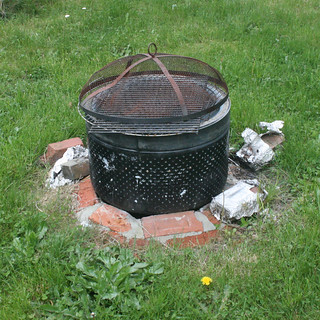 Washing machine drums are sturdy pieces of manufacturing. The perforations allow for lots of airflow. A few years ago, I asked for a fire pit for my Father’s Day present. I would do much of the effort, but my wife and daughter helped a great deal. We suck in one drum, mounted in cement. We used reclaimed bricks for the surface. We used another washer drum on top to make an oven like environment. I have wanted to do something like a clam bake on there. 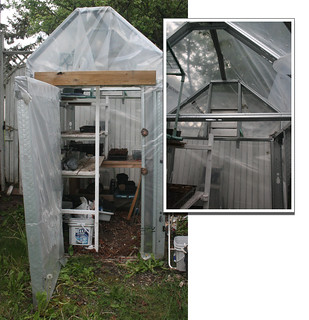 We did a renovation in the house. Basically, we moved the kitchen wall over by a foot. We used metal studs. At the end of the project, we had metal studs left over. They’re light. They’re easy to cut and shape. They are rust resistant. I used these along with some thick clear plastic. Inside of a few hours I had a greenhouse. Because it’s tied to a large wooden bench inside of the greenhouse, it has stayed put even in the worst of windstorms. I was able to find a nice shelf from a post-garage sale pile that rounded out the space in the greenhouse. 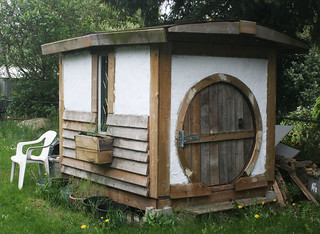 We broke up a deck. We also put a new surface on the upper deck that we kept. The junk wood and the leftover wood combined with wood from a shed I built. With the addition of some key add-on building materials, I was able to fashion a 4’x6’x6’ tall Hobbit house. We bought one window at a garage sale; and went to ReStore to buy flooring materials and an additional window. If I could build play houses for a living, I think I'd be happy. That is, unless building a play house plays out like building a web page.