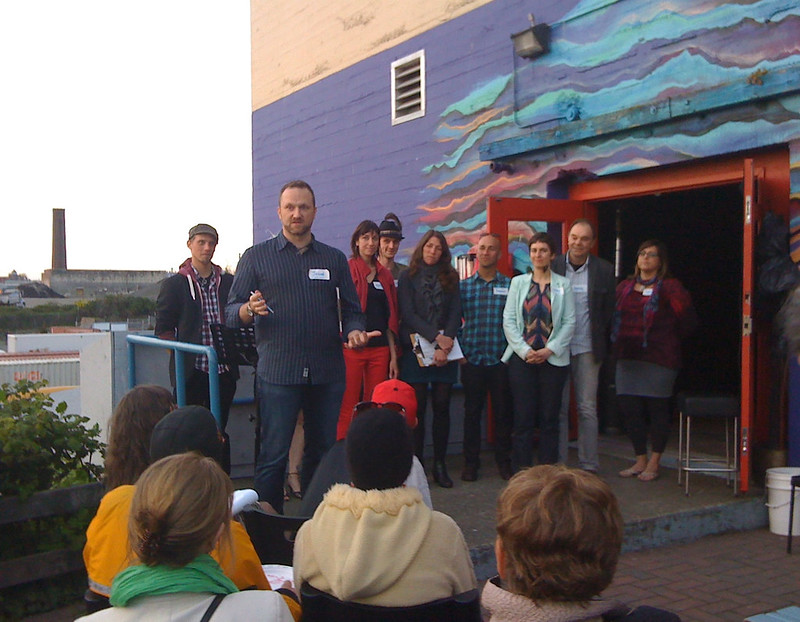 Collaboration can allow spare cycles of money and time to turn into something bigger. In the pre-Internet days, that manifested as anything from a barn raising to coins for Jerry's Kids. Crowdfunding is the way collaboration looks these days. It's not like we are all wealthy in every way. We may look at our finite selves and may think, "I have nothing to give." Instead, we have to look at what we can give as being definitive. I am really into multi-tasking. Productivity experts will tut about the problems with multi-tasking. I look at it instead as a way to make full use of a vehicle. All the seats in your car, all the pockets in your jacket, all the hours in your day-- these are all vehicles. I look at the spare seat in the back of the car and I think, I could do something with that space.

traveling salesman problem: It's a theory of how to best answer what the shortest possible route is wherein the salesman visits each destination exactly once and does so in the most efficient manner possible.
I load myself up with lots of things to do when I go out so that I successfully execute the traveling salesman problem and turn every mile in trek into a series to beneficial destinations. I look at $10 in my Paypal account either three potential Americanos or a pebble in avalanche of crowdfunding.

Our world seems to pay attention to the very large and the very little. Very large mega-corporations grab our attention. Very large disasters grip us. Very large dinosaurs fascinate us. But the very small is what changes our world. Very small molecules form high in the atmosphere and lock in heat. Very small microbes plague us. Very small transaction fees combine to make banks awash in cash. While we look with awe at a T-Rex, it's those small mammals under the foliage 65-million years ago that survived to eventually become us. Even small things can be super important. I'm watching a number of IndieGogo campaigns play out. I've become hooked on the concept of crowdfunding as a way to raise money for new ventures. It departs from the old models of investment funding; and the bootstrapping model of earning your way to success. Investment funding puts money of the T-Rex ventures out there. If it's not large and impressive, it's not loved. There are levels of financial conformity that have to be adhered to that make a hacker like myself shrivel up inside. I'm not a banking guy. I'm about 1000 miles away from having an MBA mindset. Still, I like the concept of being entrepreneur. I have tried many times to bootstrap my way to success. That is so hard-- not because work is hard, it's because some elements of success are very binary-- all or nothing. You cannot ride 2/3 of a race horse to victory. You either have to get enough or its not worth it at all. IndieGogo recognizes that. They also recognize that funders and entrepreneurs know that. This is why they have two funding models-- the flexible model (earn what is pledged, even if it comes up short); and the fixed model (surpass your goal or the project fails and the money gets refunded). Through a crowdfunding venue like IndieGogo, you can have your shot to take that third path to get to a viable place with your venture.

The campaign of special interest to me is the Stream of Consciousness project.

The Stream of Consciousness (SoC) project is a video broadcasting platform that will allow authors, speakers, facilitators, coaches, inspiring thinkers and/or the people that host them to collaborate with local AND global audiences in real-time. Events will be held at the intimate venue of Victoria's Sunset Room. The venue is too small to host speaker of a global reach, but that's where technology can play a massive and disruptive role. I have long opposed the idea of traveling to a venue to hear someone speak: the travel time, the travel expenses, accommodations. the loss of work, the risk, etc..
Terminus: Terminus is a fictional planet at the edge of the Galaxy in Isaac Asimov's Foundation Series, home of the Foundation
I worked for a company that had the hope using technology to make communication better. In that venture, the players could not adjust to the mindset shift-- they could not embrace remote sessions and virtual speakers. It meant that decision makers had to travel for days to come together. It felt like such a waste. That was several years ago. The SoC project can turn Victoria into a real-world Terminus where the important people come to Victoria because of our ability to present to the world. Could the SoC project be a sign of things to come for Victoria and its role on the world stage?

Doing something like making a small donation to a crowdfunding project allows a small action create something big.
Tags:
90-Days
Crowdfunding