There And Back Again: A Day Trip To Nanaimo 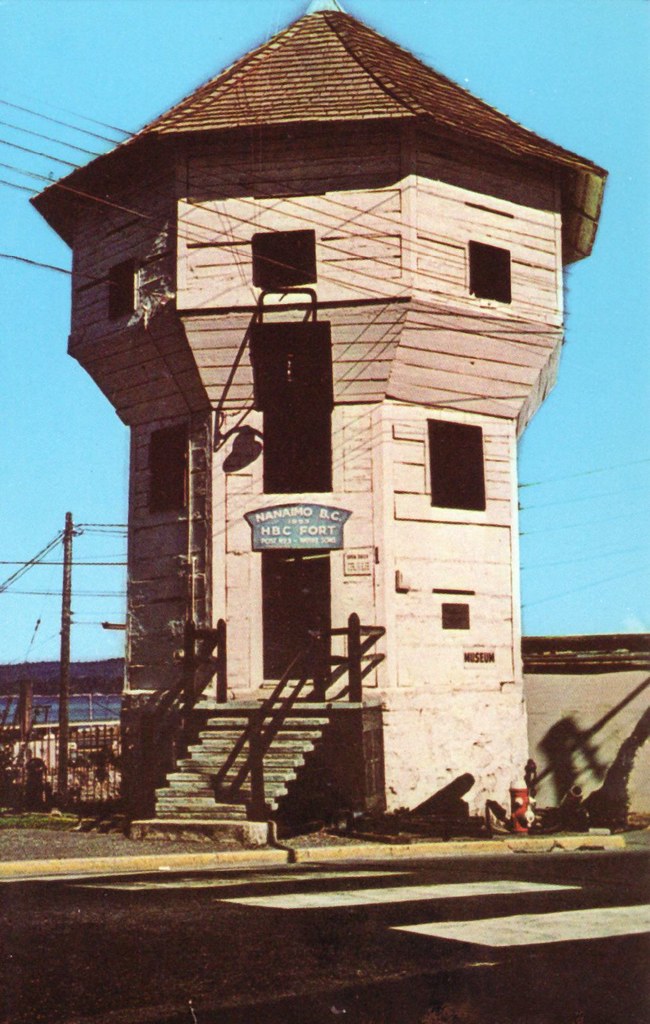 "I'm going to Nanaimo," is what I would say to friends.

After a while, the consistent response would be something like "Good God, why?"

Why Nanaimo? I like to travel. Unfortunately, the dripping tap of "hey can you do this?" means my leash never gets longer than two days or a hundred miles. That means I can get to Nanaimo or Vancouver. I like Vancouver, but it's an expensive ferry ride away. I kinda like Nanaimo and it's on the island. It's a decent size. It's much better laid out than Victoria. The crowd is a little rougher. I lived in Nanaimo as a kid, about five years before Naniamo meant "the land of many malls." Back then, the town had one movie theatre. Our phone was on a party line. We couldn't get Cablevision and the TV only gave us KVOS and (on a good day) CBC. Since getting married, we have to contemplated moving to Nanaimo. I was actually asked to interview for a job there in March. I ran the math of what the move would mean financially and, "no way"-- basically, between packing up the house and Cheryl's income interruption, we would be in the hole to 20+ months. Really: working for "the man" is not what I want to do. I want build products and services. Why get buried in debt for two years to not achieve that?

I have come off a grueling month with a client who has a "graphic designer" working with him. It has been a thankless struggle as they undo every rational design choice already built into the CMS and in the theme; then make each mistaken task progressively more difficult through add-ons, rethinks and crossed wires between themselves. The end result is a web design that will achieve very little. I doubt I will add it to my portfolio because they have stubbornly pushed for me to carry out every mistake I swore I would not do. Expect a follow-up blog post entitled, "It's not your fault" about when clients are their own worst enemies.

It's been a painful month and I wanted something that looked like a day off. Cheryl was off today, so it seemed like serendipity. I woke up at 5AM. I caught up on work and by 8AM, we were on the road. We dropped Alice at school and bee-lined up island. We stopped into Home Depot in Duncan briefly, then continued to Chemainus. 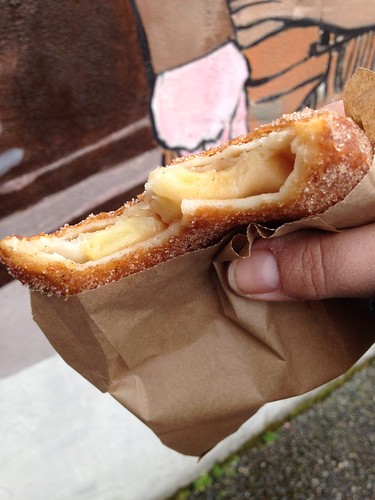 By the time we arrived most of the stores were still closed. We walked around and found the Utopia Bakery (9780 Willow St. They're on the Twitter): a nice bakery and fetched some stuff for second breakfast (yeah, well-- after what April was like, steps to prolong my life in 2015 are desirable-- so I had something from the bakery). We poked around the antique shops and the tourist traps. 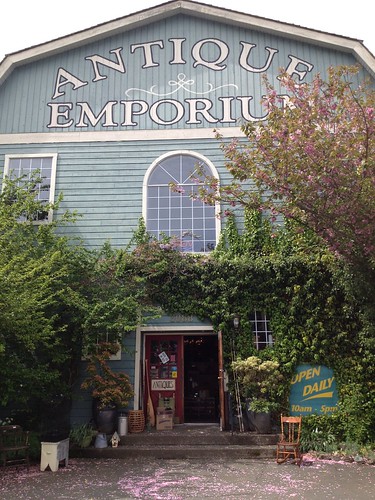 Before we left the area, we crossed the highway and went into the "Antique Emporium" on the highway. I have driven by this barn near Chemainus for more than 25 years. Each time I go by I think, "I should go in there." I don't. It's one of a number of places prominent to me that I have never walked inside of. In video games, you will find you can enter some buildings and battle monsters. Other buildings are off-limits-- their windows and doors are painted onto a big block. The Antique Emporium (AKA The Antique Barn AKA a cool place that really needs a website) felt like one of those painted on obstacles. I've made a commitment in the next few months to go through a number of these painted on doorways. The Antique Emporium was loaded with COOL stuff-- three levels of cool stuff. Where the tourist-trappy place in town had vintage ads for $8 each, the Emporium had them at 4 for $10. I snapped up a bunch with a fiendish plan in mind (stay tuned).

We continued from there to Nanaimo. We skipped downtown and took the highway to Bowen Road. I describe downtown Nanaimo as feeling like going out on a Sunday after break-up. It can feel sad, lonely, dismal and unfriendly. There is a small stretch of downtown I will still go to but long gone are the cool attractions: A&B Sound, the Scotch Bakery and the like. Hey-- don't harsh on me: open up something at the A&B Sound location, and I'll come cut the ribbon.

On Bowen is "The Stock Exchangers." Have you ever heard those concept people talk about re-inventing an experience? In the case of a pawn shop, they'd explain it is "well-lit." "On a strip mall." The staff would "have to adhere to a dress code." The Stock Exchange is all that. It's a pawn shop, but it's awesome. You can tell its origins and it still caters to a traditional clientele: there is a jewelers scale on the shelf beside the zippy butane refills (talk about one stop shopping). The place sports a huge supply of construction tools, video games, and DVDs. We scored on some awesome movies and went next door for a sushi at Tomo Sushi. Their prices are awesome. Their selection is good. They even have my favorite beverage: Ito En's green iced tea.

I know what makes Cheryl happy: thrift stores. We did the gambit. We hit the Salvation Army down the road (last time it smelled like a sewer main; this time where was a crack ho arguing with the staff about the price for a bag of wine corks). Then we hit another charity driven thrift store down the road. I took us to the mall with Value Village and set Cheryl loose in there like a kid in a musty candy store. I went to the Starbucks and sucked down their free wifi to finally install Instragram on my new cellphone. Cheryl met me empty handed and thrifted out. We turned for Victoria, stopping at two place that everyone loves: Walmart in Duncan (come for the deli, stay for the food poisoning); then Costco.

We were home by 6:30PM with kiddo and some Mother's Day purchases in tow. I got back into the flow of emails and work that had piled up from being away from my desk for >gasp< 10 hours. It felt nice to not have to work for a few hours.
Tags:
90-Days
Nanaimo