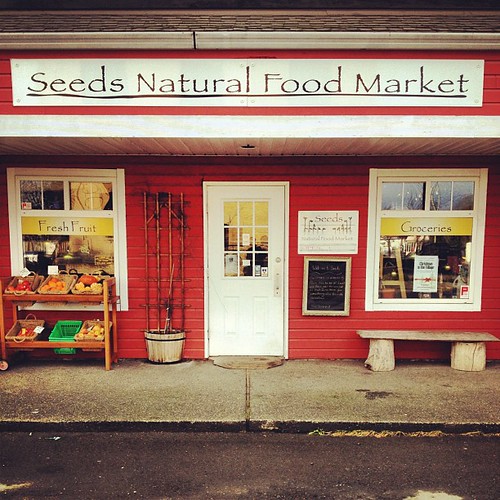 Am I in the Goldilocks Zone of community?

Here’s what they are:

Big. A real city. Victoria is technically a city, but by most standards, it’s a town. Cities like Vancouver, Seattle and hundreds of others are out there. Their populations number high into the hundreds of thousands-- millions even. They have a mix of cultures and offer a massive number of services. I think it’s hard to “stump the band” for finding stuff in a city.
Medium. Towns. I think Vancouver Island has a number of towns: Duncan, Nanaimo, Parksville, Courtenay, Campbell River, etc.. They’re usually a little monotone and quaint. Some places of the Island have been knocked down when a given industry dries up (forestry, fishing, mining).
Small. I think I’ve been a little too affected by Fallout. Ten buildings with twice as many people. Easy to get a grasp of, but too small to the end-all be-all for your daily needs. Cumberland feels like this. There are less than 1000 households and something like two dozen storefronts in the “downtown” area.

Big alienates me. I have good and bad trips to Vancouver. I have nothing but bad trips to Seattle. I have not been to many big cities, and think that is partially by choice. Medium keeps like it has an image issue-- like it’s trying to be a big, but accidentally slingshots into petty mode by accident. Small is nice, but too small on the face of it.

I live digitally. No matter how much I personally rail against “living digital” I still end up there. I go online to earn an income. I go online to connect with friends. I go online for knowledge, entertaining and shopping. How could Cumberland be considered small, if I can hold active conversations with dozens of friends per day, earn double the town’s median income without breaking a sweat and anything could show up in my post box from anywhere on the globe.

By living digital, digital access is what it takes to live well in many softer regards. Power plus a cable and I can be wired in. I think this why our world is going through so many cultural changes. We were primed to change and the easy access to other has pushed this cosmopolitan mindset on us all. New views from the world get your attention. Bad ideas from the shadows get the light of day shone on them.

Beyond the whole “living digital,” a small community brings challenges:
In some communities, if “the road” washes out, you’re screwed. That has happened to some small communities. A place like Cumberland is resistant to that.
If power gets knocked out, you could be powerless for a long time. When the ice storms hit Quebec, some communities were without power for upwards of a month. I would look at that situation as a crisitunity. I would hope to have varied power solutions (solar, wind, a heat pump and a good old fashioned wood stove). That handles the “will I freeze” problem, but a lack of power will still whack connectivity. No connectivity and my whole global village idea goes out the window.
The Internet can catch a cold. After 9/11, a lot of my business dried up. Market sectors can dry up or get flooded with too much competition. In a big or medium sized city, I can go flip burgers. In a small town, I may be out of luck. This has happened before in many Island communities. It too has happened after 1964 when the coal mines in Cumberland closed. Small can mean a real lack of variety in your community. Even in Victoria, I meet all sorts of people-- not just the one Arab or that one Japanese person-- but a real variety of people. I think many combinations lead to many solutions. It’s easiest to connect to people in your community.

Inertia keeps the world spinning (okay, partially). I live in Victoria because I have been here for so long. When I did the Nanaimo moving math, it said that I should not consider a change in locale. If we do not move for the greener pastures of Cumberland, what could I do with the channeled rage of life in Victoria?

I can educate people. There is a missing mass in our community. The biggest demographic is the 20 to 30 year olds. Look at all the angry old guys at those public hearings. Look at who shows up to vote? I can urge people consider making their voices heard.

I can get people to develop a palate for civic engagement. “Civic engagement” sounds like a non-medicated replacement for sleeping pills. Holding those in power responsible can be a little frustrating at first, but you can make a sport of it. Holding them to account doesn’t need to be a sport for the retired alone. If old folks’ time on the lawn bowling courts can be constrained by the appearance of young hipsters in white, then the grumpy old man crowd can get crowded out by the young.

I can live global. Right now. I already do this. Others can do it, too. If the medium size town of Victoria is too small, tap into the global village for hard-to-find goods and hard to locate information. Bring the world to you. If you still want to move to Cumberland, then you can be in good practice for living global from your small village.