A decade ago, our IT co-op in its last gasps of life tried to open a co-working space. It was a disaster. Looking back, maybe I can just say, it was "Ahead Of Their Time."

In 2002, we recognized that office space was expensive. The infrastructure of an office was overkill. Sharing space was the way to go. I found warehouse space off of Douglas St. I went deep into hock to buy building supplies. I spent months working on getting it ready. Had a competent team done the reno, it would have amounted to weeks instead. We involved two other companies in the project and we all suffered while it didn't get done. We should have done it differently. It was such a learning experience.


Today, I walked into The Dock, a co-working space off of Fan Tan Alley. It's a co-working space that looked very much like the space we were trying to create. This is an idea who's time has come. In Victoria, office space is expensive. By having a coworking set-up, tenants can come and go but the space can remain in use. Beyond the space available (it's not the final frontier), it lets people with a similar vibe work together. Maybe new synergies and friendships can form up. New opportunities can come about. The Open House at The Dock was a who's who of cool local people who are taking part in the future Victoria. It was really great to get to hang with them all. As you have guessed (see right), there were plenty of photos to be had.

Maybe co-working space is up your alley: some place in town to hang you hat, hold a meeting or maybe just sit at a desk for a few days a month. The website, Share Desk, lists a lot of co-working space available, including space in Victoria. 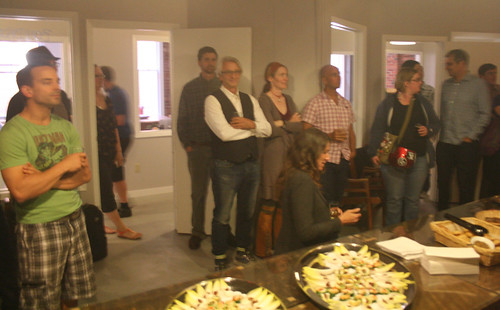