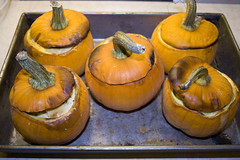 I found these cool little pumpkins at an awesome local store called, "The Root Cellar." I thought: hey, I like cheesecake and I like pumpkin, so I combined the two: a mini-pumpkin filled with pumpkin flavored cheesecake.
Ingredients:
Directions:
‹ Noodle Bowl up Turkey Cake ›

Copyright © 2020, Shawn DeWolfe. This has been a Drupal Driven Website